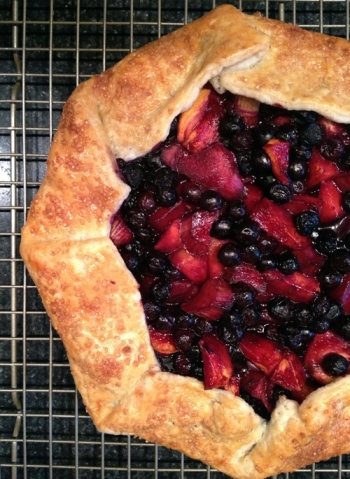 I’ve been trying to get in the habit of using up fresh foods in my kitchen before they go bad. A self-inflicted Iron Chef challenge. “Allez cuisine!” I found that it’s been a great way to challenge and expand my culinary skills. Today, my ‘secret’ ingredients were one ripe peach and a stalk of rhubarb. Really not enough fruit to make much of anything. But, luckily, I had a partial bag of frozen organic blueberries leftover from our Saturday morning pancakes too.

Taking inspiration from my friend, new mother and pastry chef, Sarah and a couple of blogs about galettes, I came up with the recipe below. Sarah was sweet enough to give me some pointers (that I noted in my recipe) after I tasted and became enamored with her ginger peach galette. Her pastry was a perfectly flaky, tender crust filled with slightly sweetened, spiced slices of peach with subtle bits of candied ginger interspersed throughout. The ginger and pepper elements in the recipe below are a take on her version as is finishing with the tart with turbinado sugar (aka sugar in the raw) to give it a little spark.

Lining the bottom of the galette with the almond meal mixture was influenced by the Rhubarb Galette recipe at Tasting Table. I liked the idea of bringing a nutty flavor in and keeping the bottom of the galette from getting soggy. I chose to incorporate the ginger in this layer of the pie as well. It’s less sticky to chop candied ginger into a flour/almond meal mixture than by itself.

The crust/pate brisée is an adaptation of several recipes and their techniques. I’ve struggled with making the perfect pie/tart crust for years and am finally coming close to mastering it. The Cook’s Illustrated recipe in the The Science of Good Cooking, The Food Lab’s post about the Science of Pie Dough and having Sarah video Skype with me while I was making this challenging dough, (Sarah directing, “No, not wet enough!”) has helped me come a long way. I doubt that Sarah is available for the masses via video chat, but, I’d highly suggest you check out the other sources. And I’ve convinced Sarah to let me video her techniques soon. I will share her wisdom!

Thankfully, this impromptu galette turned out delicious. Otherwise, this post would’ve been about the galette that might have been. The tart rhubarb was a compliment to the mellow berry flavor of the blueberry and peach. The ginger added a nice spice and the almond meal a subtle nuttiness. I’ll be making it this new recipe again soon. I hope you’ll enjoy it as much as we did.

Preparing the crust
Plan this part ahead as the dough will at minimum need to rest in the refrigerator for 1 hour. Preferably 2 or more for a tender crust. Sarah rests hers overnight for optimal tenderness. Also, all your fats and liquids should be ice cold. Freeze you butter and shortening as well your vodka. Though the vodka sounds like an odd choice. It’s tasteless and will cook off, but it will not encourage gluten development (like water), so it’s a great way to make the dough more pliable while avoiding the peril of a leathery shell. And the word on the street is work your dough as little as possible for a tender, flaky crust.